Women in IT – Debbie Dean 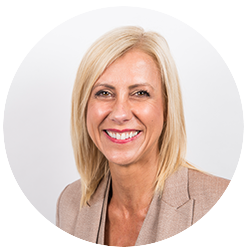 I have been in the industry for 28 years now.

My first roles in IT began at SBL (Software Box) selling to the Enterprise and Corporate market and I started with Phoenix as a Sales Executive in August 1995. I remember the day clearly as I was offered a choice to have an account base within the Public Sector team or to start a brand-new sector from scratch – Charities and Housing. I love a challenge and really wanted to own and prove myself so jumped at the chance of starting a new sector. I was literally passed a directory of Charities and Housing Associations to call and that is how it began. Within a year I started to build out a team and in October 2000 became the Voluntary Sector Sales Manager. From here I was promoted to the UK Licensing Sales Manager and then an Associate Director.  I had my gorgeous son in February 2010 and took a one-and-a-half-year break, as I was in hospital from being 21 weeks pregnant and never left until he was born. I returned to be the Vendor Alliances Manager, then National Sales Manager and finally in November 2016 took on the role of Education Sales Manager and Director of Education Sales.

I have always been in sales, starting out in some really challenging commission only jobs, the ones that if you didn’t hit target in three months you were out! My colleague Mark Pickersgill can relate to one of those sales companies we both worked for – ISA International / OST in Bradford. Really tough but gave you the backbone for tenacity and confidence – you couldn’t be weak and mild. They also had some amazing nights out from what I can recall.

My chance of getting in to IT Sales came and my number one reason for wanting to get in to IT Sales was down to money. I wanted to earn as much as I could. I was only 20 years’ old with high expectations of myself both in business and life. I got the bug immediately and really challenged myself to over achieve in targets and make an impact on my lifestyle.

What also excited me in IT was how even then it moved so quickly, the training was constant and when I joined Phoenix, it was a young company that I could grow with.

The difference with IT to my prior roles was that I wasn’t selling something that wasn’t needed using promotions and gifts. IT was making an impact within organisations and customers wanted someone that was a good Account Manager, who would be proactive with information and knowledge.

To be honest, I learnt a lot from my customers and still do. As customers got to know me and trust me, they would freely offer information and I am still good friends with some that I managed way back in 1995. Some are no longer here but I will never forget the conversations and genuine relationships that I had with them all those years ago which made me who I am today.

For me there is no other industry I would like to work in, it still excites me, probably more than ever and now to see our younger staff join Phoenix as I did all those years ago, I really want to help support them in what is a fantastic career with so much potential and opportunity.

I am going to say not really, but I am sure I did. You must be driven and focused in whatever you do. It was obvious from the beginning it was very male dominant in the wider IT world, but I was lucky enough to have owners and leaders that were women. They seemed to employ a good mix of both male and females in sales which I don’t think was purposely done but this kept a good balance within the office banter. Don’t get me wrong I also reported to male leaders who I got on and worked well with and they were the ones that promoted me in later years, but it was always in my mind that I had to do better to get ahead.

The biggest challenge back then was being taken seriously. Not only did you have to over perform against targets, but make sure you had the knowledge and were able to convey that in a professional manner.  Sometimes it was difficult to be heard, even though you had the creativity and energy.

Oh wow, so many changes…I remember getting Lotus CC Mail at Phoenix and using Dataease – DOS as our database, as well as getting hand ache from writing out all the orders and waiting for faxes!

I think there was seven sales people at Phoenix when I started, maybe three in the help desk, one in purchasing and two in licensing admin. There has been great changes of growth and I have seen it grow from what started as a family feel business / partnership in to the Phoenix it is today – what a journey and one that I am proud to be a part of.

The industry has changed, no longer is there that hard product sell, it is consultative and about longevity and relationships with customers and partners.  It is exciting to see technology being used within the public sector that is improving the way we educate and serve communities.  The innovation, creativity and our leading universities in the UK that are transforming the way they run their business is second to none. Technology has really become the heart of any organisation and the cultural shift is also dramatically changing and evolving for the better.

You just need to look at the number of successful women leaders we have at Phoenix. I know when we interview young graduates for sales roles, what becomes apparent is their respect and aspirations to join a company that encourages women in to IT.

So perhaps to promote what has been built within Phoenix and the wider partners, to showcase the mutual respect and successes to help encourage more women in to IT.

We should make sure that schools and education institutions know that IT is a world that employs the best people for the right jobs, no matter of gender and no matter if it’s sales, operations or technicians. If you have the drive and ambition then IT is an industry that is exciting, needed and growing at a rapid rate. Women should look at the industry with equality and ambition.