Helping the next generation of women in data

Our very own, Cheryl Lapham (Microsoft Business Manager for Education) talks about Women in IT, but even more so, Women in Data

“As a woman that has worked in the IT sector for approximately 30 years, I am well aware of the lack of diversity when it comes to the world of technology.  Yes, it is changing, but very slowly and the IT world, whether in the commercial or Public Sector, is still very much dominated by men.  It is rare to come across women in the scope of an IT management role.  Working at Phoenix Software has been a breath of fresh air because a large proportion of the senior roles are held by women including the Managing Director and Operations Director.

It is also clear to see that women are under-represented in STEM roles, as only 19% of the people working in tech in the UK are female. Even though the industry is becoming more diverse and companies are creating resource groups to help them grow their diverse team, the gender gap is still an issue which needs tackling.

That’s why I am particularly keen to promote our partnership with TrueCue.  Like Phoenix, they are keen to change the IT landscape in relation to diversity and enable organisations to embrace the rewards of having a workforce fit for the 21st century and beyond.

The ratio between the number of males and females in society is referred to as the gender ratio. This ratio is not stable but instead shaped by biological, social, technological, cultural and economic forces. In turn the gender ratio itself has an impact on society, demography and the economy.  In the UK the ratio of men and women is close to 50/50, perhaps even nudging slightly more in the favour of women.  This figure demonstrates the huge potential of attracting more women into the IT field.

I came across some very interesting research from Diversity.Social which I thought I would reference below for you:

Ideas and innovation will come with diverse investments. According to UNESCO, women comprise 28.8% of the people employed in Research and Development. The global breakdown is quite interesting as it shows that the countries performing better in this regard are located in Central Asia, where women comprise 48.1% of the R&D workforce. North America and Western Europe occupy the fifth place with women making up 32.3% of the people engaged in R&D. Sub-Saharan Africa follows with 31.3%. In East Asia and the Pacific, only 23.4% of people conducting research are women, while in South and West Asia they encompass 18.5% of researchers. Gender diversity brings in diverse views and ways of solving problems. 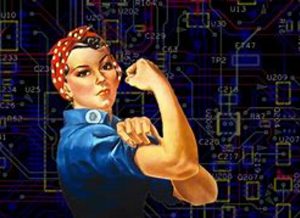 We want to help encourage that creativity, those ideas, that problem solving and those different views. For example, step back and take a look at the image opposite.

For those of us old enough to be familiar with images from the 1940’s this looks like a woman off to do the work of the men fighting in WWII.  Obviously, the background is not a munitions factory or a steelworks but the world of data and technology.  However, the concept is the same.  In the periods of both WWI and WWII when women stepped into the shoes of men fighting on the battlefield and carried out the jobs that previously no-one had thought they’d be able to do, they excelled.  About 8,000 women worked in Bletchley Park, the central site for British cryptanalysts during World War II.  The top-secret intelligence they helped to produce impacted every sphere of the war.  The women of today and tomorrow can help shape the future of the industry, the country and our global presence.

In World War Two, codebreaking at Bletchley Park grew to industrial scale. Of nearly 10,000 personnel in 1945, 75% were women. Few were older than 24. Recruited from the Women’s Services and through the Civil Service, women intercepted wireless transmissions, transported messages and staff, compiled and indexed information, operated codebreaking machinery, received and sent communications, and kept the Park running smoothly. Those with specialist skills, such as linguists, were recruited to codebreaking and traffic analysis.

This is one of the reasons why our partner, TrueCue, are running a campaign to provide information, advice and up-skilling opportunities to encourage women to seek careers in this exciting industry.

The first such event in this series is a Hackathon, in conjunction with Women in Data.

A Hackathon is an event in which participants team up to solve challenging problems with limited time. In this case, the task will be to analyse a dataset on COVID19. Through participating, you will have the opportunity to improve your analytics capabilities and presentation skills, as well as speak to women working in the Tech industry – all while learning more about the global pandemic through data.

There are two ways you can get involved with the hackathon, either as a Participant or a Facilitator …

Ben has over two decades in the IT industry, delivering both online and offline campaigns across all platforms to meet business goals and objectives. Joining Phoenix in 1999 as a graphic designer, Ben has evolved over the years into a fully-rounded marketing professional, before being promoted to Phoenix Marketing Manager early in 2018, reporting directly to the MD. With his background in creative design, Ben takes projects from inception to execution and can identify the correct strategy based on the subject, audience, and goals – while increasing the brand profile and revenue. His passion for digital marketing is evident in everything he does, and both vendors and strategic partners often comment on his incredibly positive attitude to ‘make things happen’.

See all posts by Ben Murden

Find out more and get involved with TrueCue’s Women in Data Hackathon.  You can also learn more about how TrueCue are helping to cultivate the next generation of women in data. 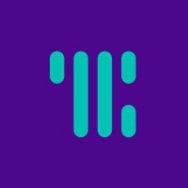 TrueCue’s mission is to empower business leaders with truth and certainty from their data. They provide high-impact consultancy and data-driven solutions underpinned by their cutting-edge technology platform – a SaaS data warehouse automation platform built for the Microsoft Azure Cloud.

Their solutions are widely used across the public, private and third sectors, with clients including the NHS, Nuffield Health, Imperial College Health Partners, Local Government, EDF, HSBC and GlaxoSmithKline, to name but a few.

So, whether its understanding patient care to optimise treatment strategies, driving customer insight to create the next sales campaign, or understanding donations across a charitable trust, their solutions have lasting value which drive performance improvements, so that you can take action on what matters most, with confidence. 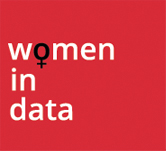 Who are Women in Data?

Women in Data UK is a movement and a force for change in the realm of data science and analytics. They provide a platform for female and gender diverse data professionals to share their technical knowledge and experiences, and to encourage more diverse representation in the industry.

The importance of gender parity and diversity in an industry that seeks to understand and influence the lives of millions of people cannot be overstated. When male analysts and scientists outnumber females 4 to 1, it calls into question the validity of consumer insights, mainly whether underlying assumptions used to generate insights or build models, takes into account the experiences of over half the population.

In this context, whilst there is a sound economic justification for increasing female participation at every level in every industry, there is a moral and societal obligation to ensure that the world of data science has proportional representation; which is where you come in.

It is imperative that children at every level of education cultivate an interest in STEM. To do this they must demonstrate how STEM can empower girls, women and gender diverse individuals to be agents of change.