The events of 2020 have seen many organisations across the UK Public Sector pivoting to rapidly enable their workforces to be productive outside the traditional office space.

In these vastly distributed environments, the boundaries of the network edge extend all the way to employees’ homes. While a rapid response was necessary in the moment, and a good first step, these measures revealed major shortcomings in user experience and put a significant strain on IT.

Read on for six network challenges experienced by remote workers and IT.

VPN Usage Skyrockets
Since 11 March 2020, global VPN usage has shown a massive spike. Workers in the US are spending an extra 3 hours a day on business VPNs, the highest jump worldwide.

When VPN technology was developed in the 1990s, it was designed to provide a subset of corporate apps to a subset of mobile, remote or branch users. In today’s world, all the users are on the VPN, distributed across many devices and locations, accessing applications on-premise and across various Software-as-a-Service (SaaS) and Infrastructure-as-a-Service (IaaS) providers. This increased network traffic pushes the VPN past its capacity, as activity bumps up against capacity and licensing limits and leads to congestion, random disconnects or rationing.

Bottom Line: No one can get their job done and productivity plummets.

Fierce Competition for Bandwidth
Throughout the first 90+ days of the COVID response, Verizon networks carried 10.3+ trillion MB of data – leaving business-critical apps to contend with a massive flow.

“My apps don’t perform like they should. I’m not getting anything done!”

Business-critical apps in a home office are up against compounding performance challenges:

Bottom Line: When employees can’t get the application performance they need to do their jobs, they not only get frustrated, but the business suffers.

Help Desk Overload
Password resets represent the highest proportion of help desk tickets, coming in at 1/3 of all requests.

“I’ve got too many passwords to remember … plus, I have to log-in over and over.”

Accessing apps from home often requires more frequent or more stringent authentication. Combine this with the new productivity apps, like video conferencing and chat, that organisations are rolling out to enable remote collaboration, and you’ve got a recipe for proliferating credentials – one more thing users have to juggle to get the job done.

Bottom Line: A frustrating, unproductive end-user experience. This frustration is passed on to IT via tickets, which can quickly overload help desk resources.

“We don’t know who’s accessing what.”

Traditional monitoring and security tools require devices to be on the corporate network.

“We can’t be sure our devices – and data – are still secure.”

As current events sharply accelerate the transition to remote working, employees are exchanging and sharing data from a variety of unmanaged personal devices to get their jobs done. However, with endpoints no longer behind the corporate firewall and web filtering, IT has much less visibility into device compliance. It’s difficult to push updates to corporate-managed devices when they’re off-premise. On top of that, home office users introduce the risk of business apps and data being shared with other users on the network.

Bottom Line: Outdated devices accessing your network for the sake of employee productivity increase the attack surface – and your risk of a breach.

Residential Network Traffic Bottlenecks
Comcast, operator of the largest residential Internet network in the U.S., saw a 32% increase in upstream traffic growth and 30–40% increase in VPN traffic from March to May 2020.

“Our OS and app updates take forever over the VPN.”

When large patches and updates are pushed from the corporate network over the Internet via an overloaded VPN instead of over the LAN, they must travel over a much slower connection to the users’ devices at home. These bottlenecks mean that routine patches and app updates that take minutes to deliver on a local network can take significantly longer.

See all posts by Jennifer Connelly 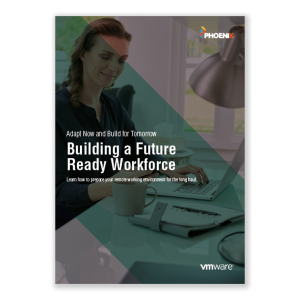 Enabling your users to work from anywhere has been a core benefit of desktop and app virtualisation since its inception. Historically, organisations have taken advantage of this capability at a small scale, but as the workplace has evolved, more employees are now working from home than ever before.

Download our new eBook to learn how to prepare your remote working environment for the long haul.

Take the next step toward optimising your network edge.

Working with Phoenix and VMware enables today’s distributed workforce to do their best work, wherever they are.

Learn more about how VMware Future Ready Workforce solutions bring the corporate network to the remote employee in a secure and scalable way. Talk to one of our Transformation Specialists today on 01904 562200, email [email protected] or complete the form opposite.